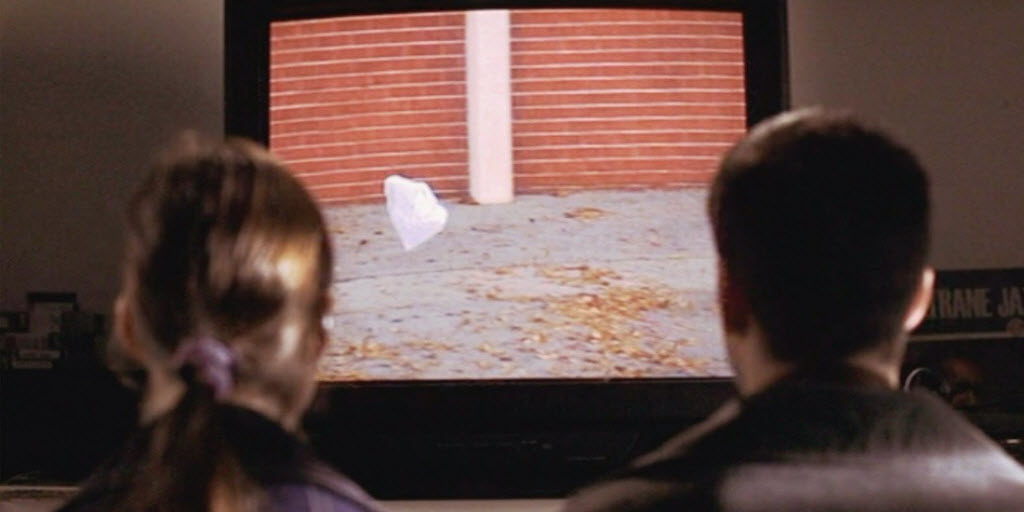 You know the scene we’re talking about and either you think it’s the most beautiful thing in the world (at least, according to lovestruck Ricky as played by Wes Bentley) or a gratuitously overt symbol of the art house film industry. The world-renowned plastic bag scene leaves viewers experiencing a spectrum of emotions, but it can be challenging to understand the exact meaning that the imagery is attempting to capture.

Where Did the Plastic Bag Scene Fit Into the Movie?

The movie itself is focused around a father suffering from a mid-life crisis who turns his romantic attention inappropriately towards his daughter’s best friend, Angela, as played by Mena Suvari. American Beauty then continues to explore concepts of suburbia, American materialism, and even the definition of beauty itself.

The infamous scene occurs around halfway through the film. As the father, Lester Burnham, devolves into obsessions over Angela, a socially awkward next-door neighbor, Ricky Fitts, courts his daughter Jane, played by Thora Birch. American Beauty launches its arguably most famous scene here —the floating plastic bag— as Ricky shows Jane his homemade film in efforts to woo her. It works. The homemade film of an everyday plastic bag dancing in the wind is capable of enrapturing Jane. And while it might work for the character played by Thora Birch, American Beauty’s hard-hitting symbolism can anger others.

For those who hate it, the plastic bag scene is nothing but a reminder of the try-hard efforts of mediocre filmmakers to imbue importance into inessential objects or elevate imagery into something grander then it really is. Critical film viewers argue that the pretentious teen atmosphere delivered by Ricky (and some say, the film in general) negates any beauty that the bag represents.

However, for every person who despises the whimsy of a white plastic bag tumbling in the breeze, there is another who find inspiration in its simplistic movements. It seems to represent a fleeting type of everyday beauty that can exist even in —and sometimes especially in—the mundane. Love exists in scenarios that are both common and profound —it is just as easy to witness miraculous beauty in a parking lot as it is to witness in a national park or from the top of a mountain.

The Main Takeaway from the American Beauty Plastic Bag Scene

Thanks in part to the excellent acting from the cast, including Mena Suvari, Kevin Spacey, and Thora Birch, American Beauty makes a lasting impact in its search for meaning to be found in daily life.

Regardless of what you feel about the plastic bag scene in American Beauty, there’s no doubt that the image was incredibly influential in both media and on the film’s viewers. Even years after the film’s debut, countless people still consider the odd —yet awe-inspiring shot— of that simple plastic bag floating around the nondescript backdrop of America.